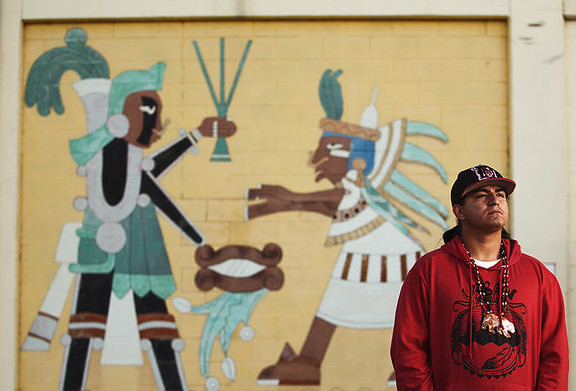 To answer this question, I use computer-assisted methods to analyze 21,316 articles that include the root words “Native American” or “American Indian” between 1999-2018 in The New York Times, The Washington Post, and The Wall Street Journal. This allows for an overview of coverage by national-level newspapers over a full 20-year period.

Many analysts of media portrayals of American Indians argue that representations tend to have a negative tone, focusing on themes of poverty, alcoholism and drug addiction, gambling, and suicide. They also contend that the media depicts American Indians as being pre-modern, living in teepees and wearing only traditional clothing.

To see if these views about negative coverage were correct, I used a method involving dictionaries of positive, neutral, and negative words (such as “beautiful,” “fourth,” or “attack”) to gauge the tone of individual articles about American Indians. Negative articles contain more negative than positive words, and vice versa. This set of articles is calibrated against a representative sample of over 48,000 randomly selected newspaper articles, which itself has an average tone set at zero to provide a baseline for comparison.

I found that many articles about American Indians, particularly those with a negative tone, were rife with the unfavorable topics that observers often flag. Nearly 17% of negative articles touch on alcohol and drug addiction, and 8% discuss gambling and casinos. One of the most powerful drivers of negativity is the subset of stories that mention the Washington Redskins and the controversy surrounding its name. One in nine negative articles discusses the football team, and these stories tend to be strongly negative, even if this negativity is often directed against the pejorative name rather than against American Indians.

Articles about museums are decidedly prominent and positive. Nearly 15% of all articles mention the National Museum of the American Indian specifically, and 38% mention the word “museum.” Among the positive articles, over half include the word “museum.” However, while these stories use more positive words than negative words, they are not necessarily challenging negative stereotypes about American Indians. Coverage about museums may even contribute to the belief that Native people don’t exist anymore, and that the only way to learn about them is by going to a museum.

A closer reading of positive articles also suggests that newspapers are failing to convey a well-rounded portrait of American Indians. Of a random sample of thirty articles coded as positive, just four named a specific modern Native person. The others simply described American Indians generally or as people from history. For example, one 2002 article from The Washington Post Weekend Section discusses videos at the Manassas Museum in Virginia that “enhance the museum’s permanent collection of Native American, Colonial, railroad, Civil War and local-history artifacts.” Another Washington Post article from 2011 describes an exhibit in the National Museum of the American Indian that explores “the respect Native Americans held for the ‘Horse Nation’” and “includes decorative regalia, hunting apparel, weaponry and photographs.”

Not only are positive articles limited in the topics they cover, they are also typically not located in prominent or visible parts of the newspapers. Within that same random sample of thirty positive articles, fourteen appeared in the Weekend Section, or a similar guide to leisure activities. Meanwhile, just six articles were in the front-page section, one of which was a paid death notice.

The media’s shortcomings in portraying American Indians as people living in the twenty-first century may have significant implications. As Crystal Echo Hawk (Pawnee) explains, “People were less likely to support certain rights and social justice issues for Native people when they had zero perception and understanding of who we are.” Thus, despite the fact that American Indians face the highest rates of being killed in police encounters, poverty, unemployment, and rape of any racial or ethnic group in the United States, nearly two-thirds of Americans do not believe that American Indians face significant discrimination today.

In short, although the tone of newspaper articles may not be as negative as some analysts believe, coverage is hardly representative of the lives and experiences of American Indians today.

Methodological note: I examined 21,316 articles that contained the root word “Native American” or “American Indian” in The New York Times, The Wall Street Journal and The Washington Post published from January 1, 1999 to December 31, 2018. I used techniques including lexical sentiment analysis and regression analysis. For more information on our methods, see here. Photo credit: Jason Sinn