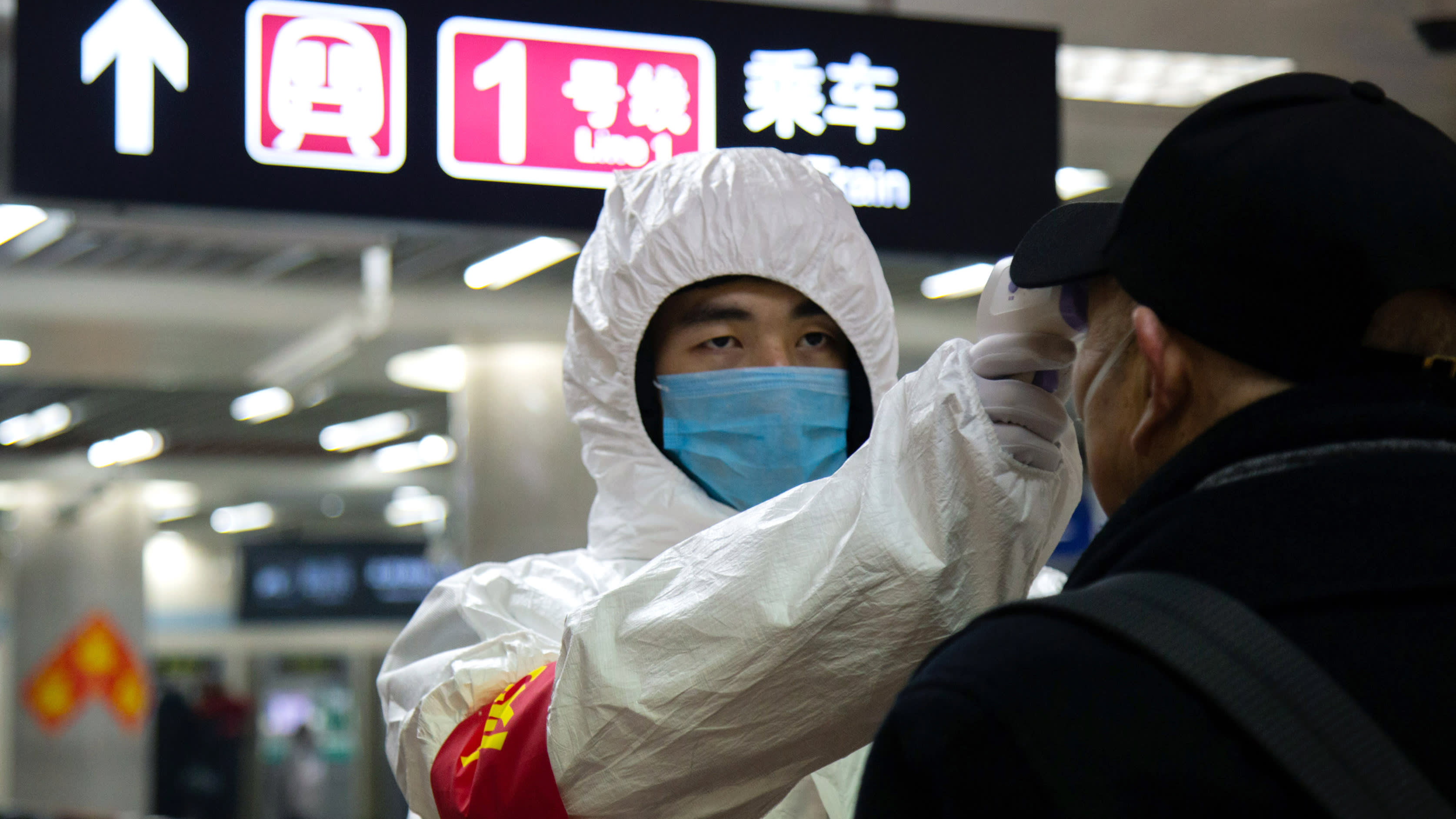 The COVID-19 outbreak has cost thousands of lives and billions of dollars in lost revenues. It has also elicited charges of anti-China racism as the media focus on its origin in Wuhan. In a recent op-ed in the New York Times, Harvard University Professor Hannah Marcus warns of the tendency towards discrimination during epidemics when she writes, “The predictable turn to xenophobia, racism, and persecution represents the breakdown of our society’s laws and morals in the face of fear and disease.”

One way to assess whether this is indeed taking place is to examine coverage of China in the mass media. Are the media obsessively focused on the coronavirus in a way that contributes to episodes of racism and discrimination? To answer this question, we analyze every article in four major American newspapers that included a reference to China in the month and a half before and after the outbreak was first reported.

Articles mentioning China have indeed been more prevalent in recent weeks, and extremely negative articles related to the coronavirus represent the bulk of the increase. At the same time, there are a substantial number of articles about China since the outbreak that do not touch on COVID-19 at all, and those articles are actually not negative, on the whole. These patterns suggest that media coverage of the coronavirus is indeed driving strongly negative associations with China.

Here’s how we did our research

We use the presence of positive, neutral and negative words (such as “attack,” “fourth” or “beautiful”) to gauge the tone of individual articles. Negative articles contain more negative than positive words, and vice versa. For example, “The coronavirus epidemic has coincided with recent aggressive moves by Washington that have left many officials in China fuming over what they view as an effort to weaken the Communist Party’s leadership” is a particularly negative sentence given the presence of words like “aggressive,” “fuming,” and “weaken.” To clearly communicate our measure of article tone, we break it down into blocks of significance. Any score between 0.1 and -0.1 is close enough to 0 that it is essentially neutral. If it is between -0.1 and -0.3, it is modestly negative; between -0.3 and -0.5, clearly negative; and less than -0.5, strongly negative.

For our analysis, we collected 5,487 articles published 48 days before and 49 days from January 8 onward—the first day an article was published about the virus. We conducted database searches for the words “China” or “Chinese” in four major American newspapers: The New York Times, The Washington Post, The Wall Street Journal, and USA Today. 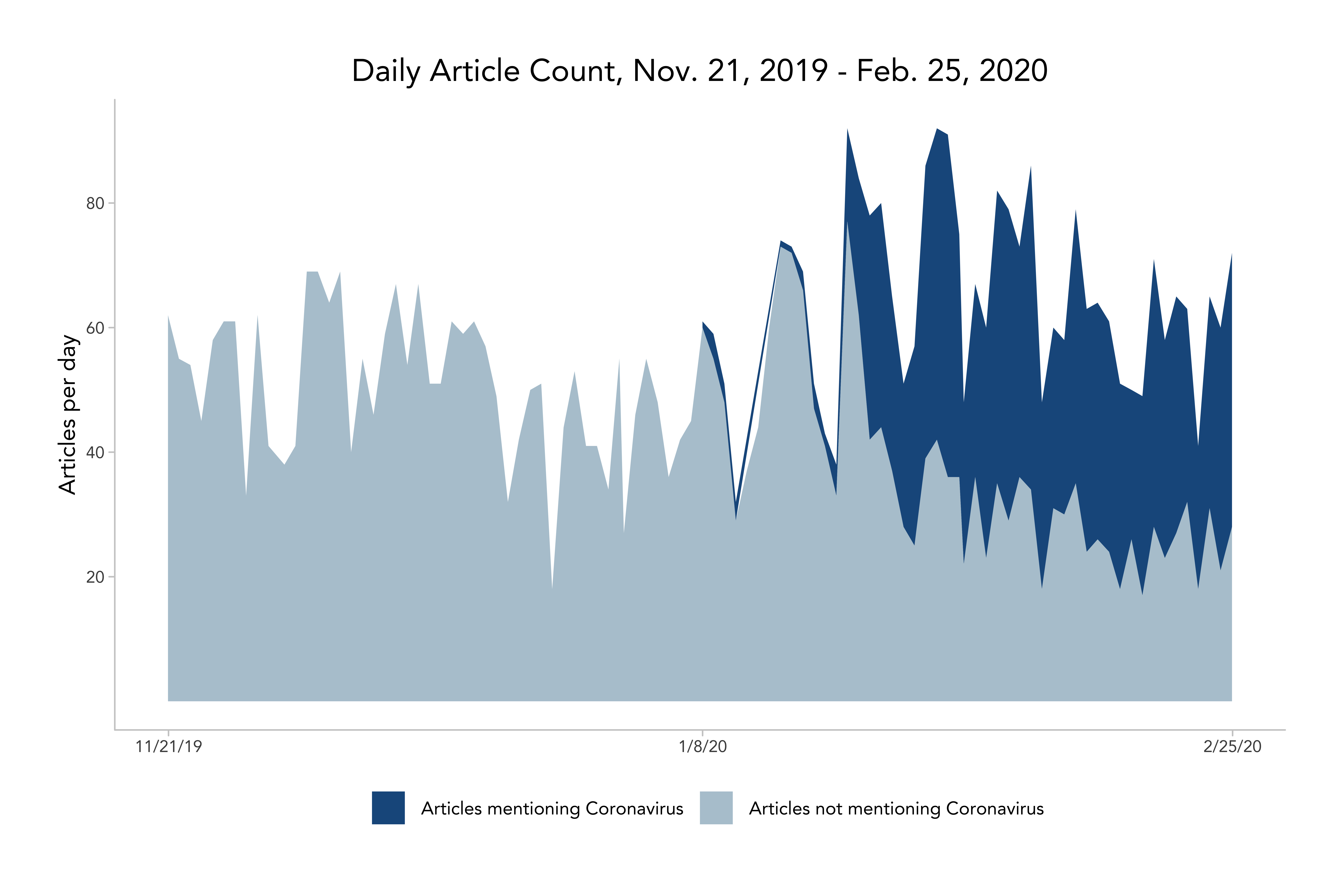 Overall, China articles before the outbreak were modestly negative, with an average article tone of -0.15. These articles were primarily about US-China relations, the economy, and security.

Not surprisingly, coronavirus articles often contain words like “panic,” “terror,” “hysteria,” and “alarm.” Such dramatically negative articles are especially likely to generate strong reactions, and thus to lead to highly negative associations with China. Experimental research shows that exposing readers to strongly negative articles makes them feel less warmly toward social groups like Muslims. The same effect is likely occurring with respect to attitudes toward China and Chinese people, and to Asians and Asian Americans by extension.

The coronavirus outbreak has generated a spike in China coverage and has made it markedly more negative. But what about the 1,788 articles since January 8 that don’t mention the virus? The tone of these articles actually climbed modestly in the positive direction from -0.15 to -0.04. China articles published after the outbreak that do not mention the coronavirus are thus essentially neutral, and in fact even modestly more positive than their pre-COVID-19 analogs.

The greatest amount of coverage focused on US-China relations, with 75% of all articles mentioning American politics-related terms such as “Trump.” There were also a large number of articles that covered the economy and security. An excerpt from a February 18 non-coronavirus article from The New York Times shows how such topics can convey a relatively innocuous tone: “Michael Pillsbury, a China scholar at the Hudson institute who advises the Trump administration, said that Trump’s comments reflected the president’s focusing on increasing trade, boosting jobs and making Americans wealthy.”

In the end, while the total number of non-COVID-19 articles declined in the period after January 8, there was hardly a precipitous drop compared to the 48 days before that key date, especially given the pressing need to ramp up coverage of the virus. Reporting about the key facets of the Chinese economy and society hardly disappeared, and the tone of those articles did not become more negative.

Are journalists responsible for xenophobia?

In the last few weeks, the spread of COVID-19 has spurred a wave of xenophobia in the United States and abroad that has affected Asians and Asian Americans. There have been a number of documented racist assaults and acts of discrimination as fear has gripped US citizens. The Washington Post has even created an online form to collect anecdotes from those who have experienced racism or xenophobia in connection to the coronavirus. #CoronaRacism has become a trending hashtag on Twitter.

While some of this bias has undoubtedly been fueled by the strongly negative associations between COVID-19 and coverage of China, the four newspapers we investigate have not shifted all of their coverage to the coronavirus. In fact, they have continued to report on the US-China relations, the economy, and security, and have done so without any additional negativity. It is important for reporters to frame stories of the coronavirus carefully when discussing its origin and spread. But major American newspaper outlets are not simply reducing coverage of China to this singular epidemic.

Methodological note: Our analysis includes 5,487 articles mentioning China published in The New York Times, The Washington Post, The Wall Street Journal, and USA Today from November 21, 2019 to February 25, 2020 (48 days before and after the first article was published mentioning Covid-19 on January 8, 2020) with the root words “China” or “Chinese” in the headline or text of the article. For additional information about our methods, see here. Data Visualizations by Mira Chugh. Photo credit: Betsy Joles / Getty Images.