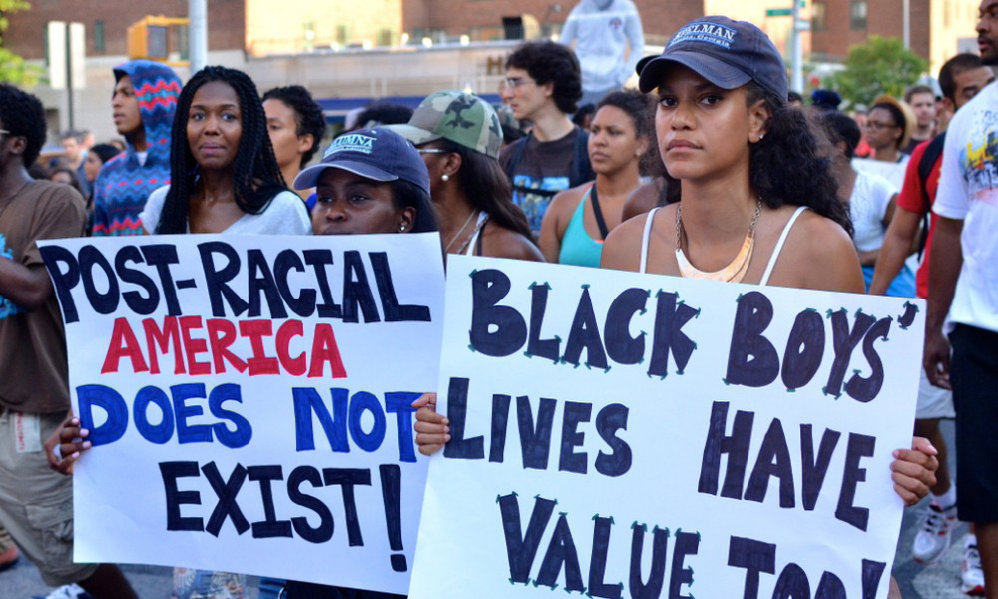 Following President Barack Obama’s 2010 State of the Union speech, Chris Matthews commented to a national audience on MSNBC “It’s interesting; [Obama] is post-racial, by all appearances. You know, I forgot he was black tonight for an hour.” Many Americans shared Matthews’ sentiment of America becoming a post-racial state following Obama’s election, believing that racial identities were not meaningful and that racial prejudice was no longer a major societal problem.

Undoubtedly, Barack Obama ascending to the United States presidency was a milestone for the Black community, but did it signal that we had achieved a post-racial America? What do trends in media coverage of Black people indicate about how Americans talk about the salience and significance of being Black?

To answer this question, we gathered articles that included variations on the root words “Black” or “African American” between January 1, 2000 and December 31, 2020 in The New York Times and The Wall Street Journal. Analyzing these 92,699 articles allowed us to track coverage of Black people in these two major national outlets over the last 21 years.

If the United States were becoming post-racial, we would expect to see a drop in the number of times Black people were specifically mentioned in the media. Our data show that such coverage decreased from the Bush Administration to Obama Administration, with the average number of articles declining from roughly 8.8 to 7.5 per day, respectively, at least through the death of Michael Brown. This is consistent with the post-racial narrative, even if it is not a dramatic decline. 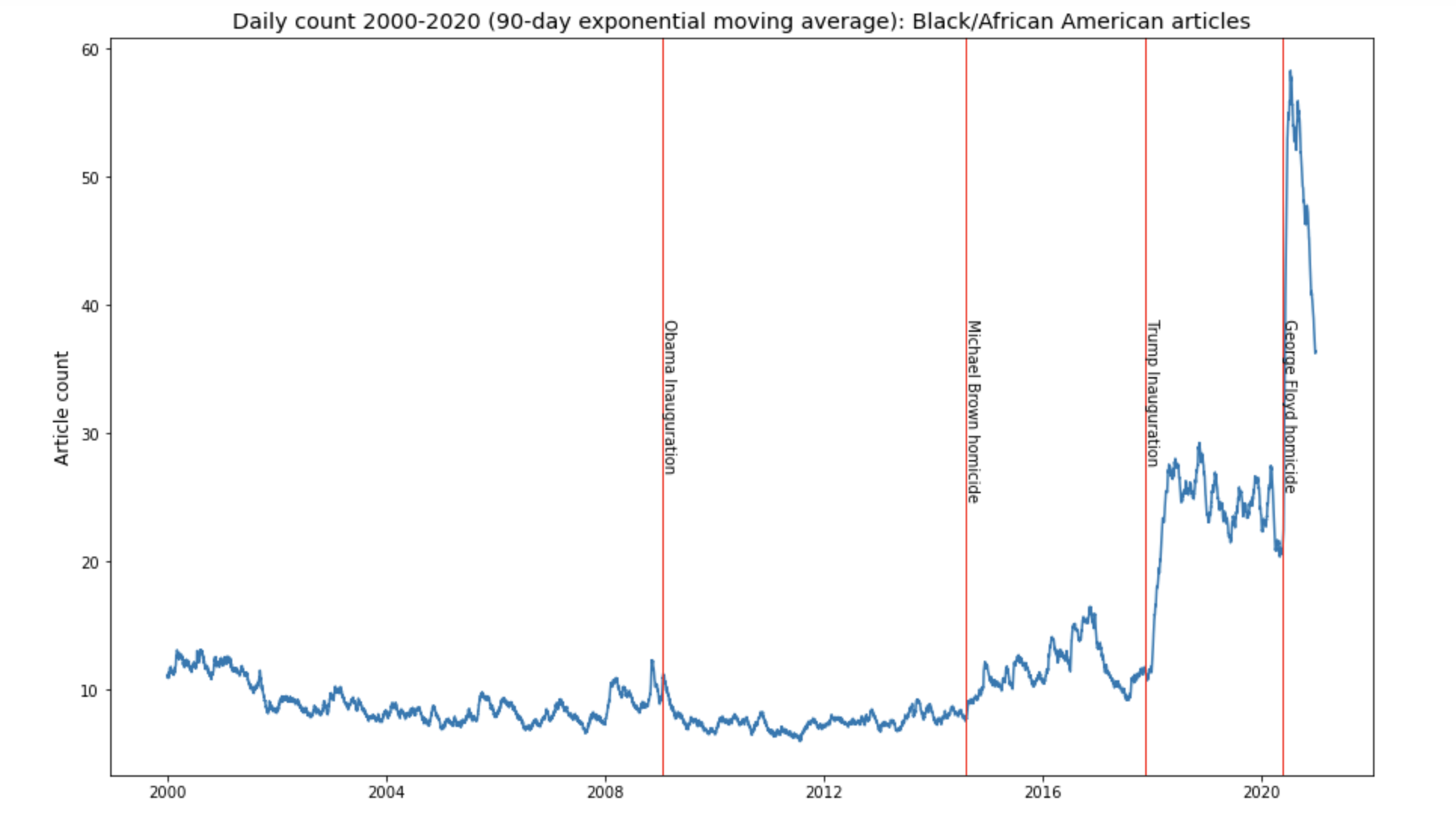 Yet, this pattern did not hold. As the data show, specific events catapulted mentions of Black people back into the media, largely because of discourse about racism. Between Michael Brown’s death and Trump’s inauguration the average daily article count increased to 12.1 per day. Brown became the first widely cited name in the Black Lives Matter Movement, which was founded in 2013 to protest the murders of unarmed Black people by police officers. Increased coverage of Black people following Brown’s death suggests the media captured racial tension more frequently by emphasizing police brutality and the growing Black Lives Matter Movement.

Media coverage of Black people tripled with the election of Donald Trump, an extremely controversial president who has promoted bigotry on multiple occasions. Between Trump’s Inauguration and George Floyd’s homicide there was an average of 20.8 articles per day mentioning Black people. The data peaks at nearly sixty articles per day after Floyd’s homicide in May 2020, suggesting that reporting of police brutality and the Black Lives Matter protests further increased coverage. While article counts began to decline by the end of 2020, they still remain well above the prevailing average during the rest of the Trump Administration.

It is not just the frequency of articles, but also their tone that shows that the United States has not become a post-racial society. In a truly post-racial country, articles mentioning Black people would closely mirror the tone of the average article in American newspapers, which has a valence of 0 on our scale. The average tone in the years following Obama’s election was indeed less negative (-0.1) than the average tone of articles during Bush’s presidency (-0.2). While this slight improvement in tone may be consistent with a post-racial narrative, this trend was dramatically reversed following Michael Brown’s homicide. 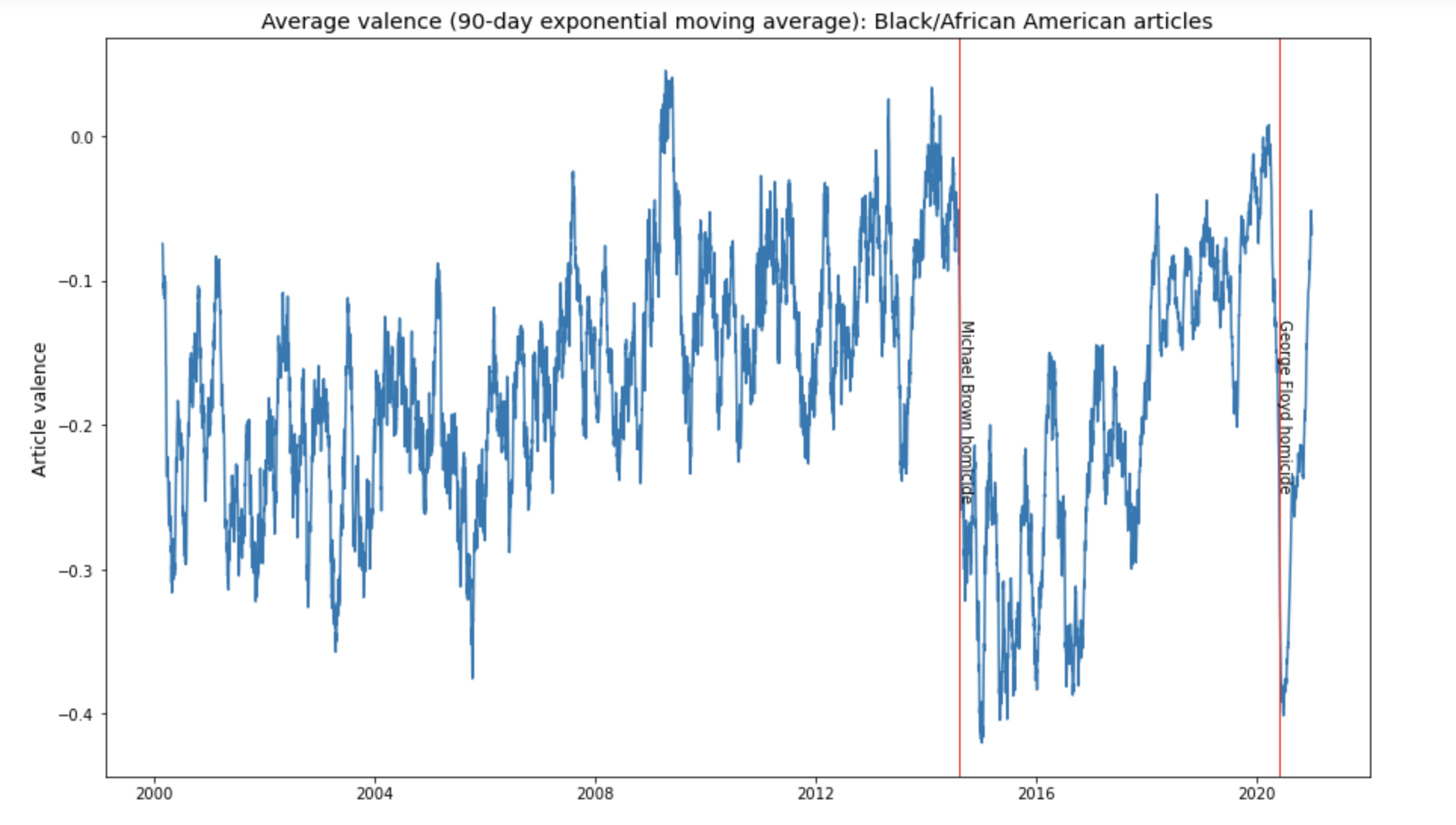 The same striking drop in tone can be seen following George Floyd’s homicide. These findings are understandable since violence is an inherently negative subject. Instances of disproportionate police brutality against marginalized people are clear evidence that the United States has not overcome racial injustice. As such, it is not entirely surprising that these articles have a negative tone; media coverage of injustice is important to spark positive change in how American society interacts with its Black citizens.

The rise of Black Lives Matter Movement in tandem with the subsequent election of Trump showcases that the Unites States has not transitioned into a post-racial society. Spikes in media coverage after the deaths of Michael Brown and George Floyd are undoubtedly related to increased coverage of Black people as conversations around police brutality and the Black Lives Matter Movement gained traction. If a post-racial society does not exist after the election of the first Black president, what will it take to shift us in that direction? And given the importance of the issues covered by the media in the past few years, should that even be our goal?

Methodological note: We examined 92,699 articles that contained variations on the words “Black” and “African American” in the New York Times and The Wall Street Journal published from January 1, 2000 to December 31, 2020. We used article frequency to determine the 90-day moving average for articles written per day and we used sentiment analysis to examine the trends in tone. For more information on our methods, see here. Photo credit: Williams College Africana Studies.