Although Venezuela was once considered by many observers to be a relatively prosperous and stable country in Latin America, this perception has shifted dramatically since Nicolás Maduro became president of the country in 2013. Venezuela has experienced hyperinflation, corruption, ballooning debt and shortages of food and medicine that have resulted in high rates of poverty, crime, violence and starvation, the reemergence of once-eradicated diseases, and the mass emigration of more than 3 million Venezuelans.

Given this wide range of issues, the US media could choose to cover a wide array of challenges, but which have they actually focused on? If they emphasize the humanitarian crisis in Venezuela, coverage might lead to feelings of sympathy among readers; if they focus on the security crisis and increased violence in the region, coverage might lead to support for US military intervention. On the other hand, newspapers may tailor their coverage to issues that their readers perceive as being important to American interests, such as the Venezuelan government and economy.

We build on and update Casado-Gutiérrez, Sapiezynska & Sánchez’s finding that news articles about Venezuela between 2009 and 2010 focus primarily on politics. We do so by examining newspaper coverage during Maduro’s presidency. We gathered 7,197 articles from the Washington Post, New York Times, and Wall Street Journal between the date of Hugo Chávez’s death in 2013 to the end of 2018 that contained the root word “Venezuela.” It was during these years that Venezuela’s economy collapsed and the extreme humanitarian crisis developed.

In our study, we tagged each article for the presence of specific words that we mapped onto four different frameworks: “humanitarian,” “economic,” “security” and “political.” For example, articles that mentioned “refugee,” “shortage,” “hunger,” “xenophobia,” “poverty” or “asylum” were classified as belonging to the humanitarian framework, while ones that used “kidnap,” “attack” or “military” were tagged for the security framework. The selection of words for each framework was based on the results of performing topic modeling analysis and manually reviewing relevant articles.

As shown in the graph below, economic and political themes were discussed the most frequently, appearing in 80% and 77% of articles, respectively. Our economic feature contains words like “inflation,” “oil,” “dollars,” “stock” and “reserve” while our “political” feature includes terms such as “government,” “assembly,” “democracy,” “dictatorship” and “parliament.” Even as Venezuela has been ranked as the most dangerous country in the world and almost 90% of its citizens live in poverty, security and humanitarian features appeared less frequently – in 58% and 42% of articles, respectively. 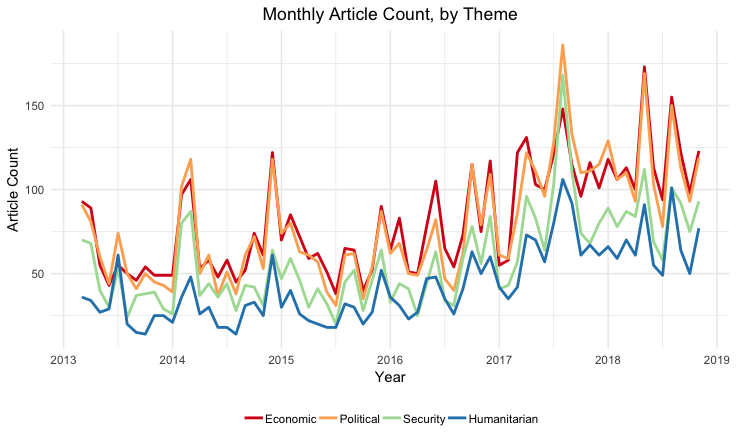 These results suggest that, since Maduro took power following Chávez’s death, US media coverage has mostly discussed economic and political topics. This focus is somewhat understandable when considering the United States’ vested interest in Venezuela’s economy. However, it is difficult to comprehend why newspaper articles would not do more to highlight the direct and tragic consequences of Venezuela’s economic and political turmoil for its own citizens.

It is important to understand the consequences of our findings. How might the focus of the US press on economic and political frameworks when covering Venezuela, impact the perception that Americans have toward its situation? A 2019 Ipsos survey helps answer this question when it revealed that: “While more than half of Americans believe that Venezuela is important to the national and economic security of the U.S. (56%), only one out of four Americans are familiar with the ongoing crisis (26%).”

Our analysis suggests that the US media may not be doing enough to educate almost three-quarters of Americans about the extreme nature of the humanitarian crisis in Venezuela today.

Methodological note: We examined 7,197 articles that contained the root word “Venezuela” in the New York Times, Wall Street Journal and Washington Post. Our analysis looked at articles published in the period from March 5, 2013 to December 31, 2018. We used techniques including collocation analysis and topic modeling. For more information on our methods, please click here.