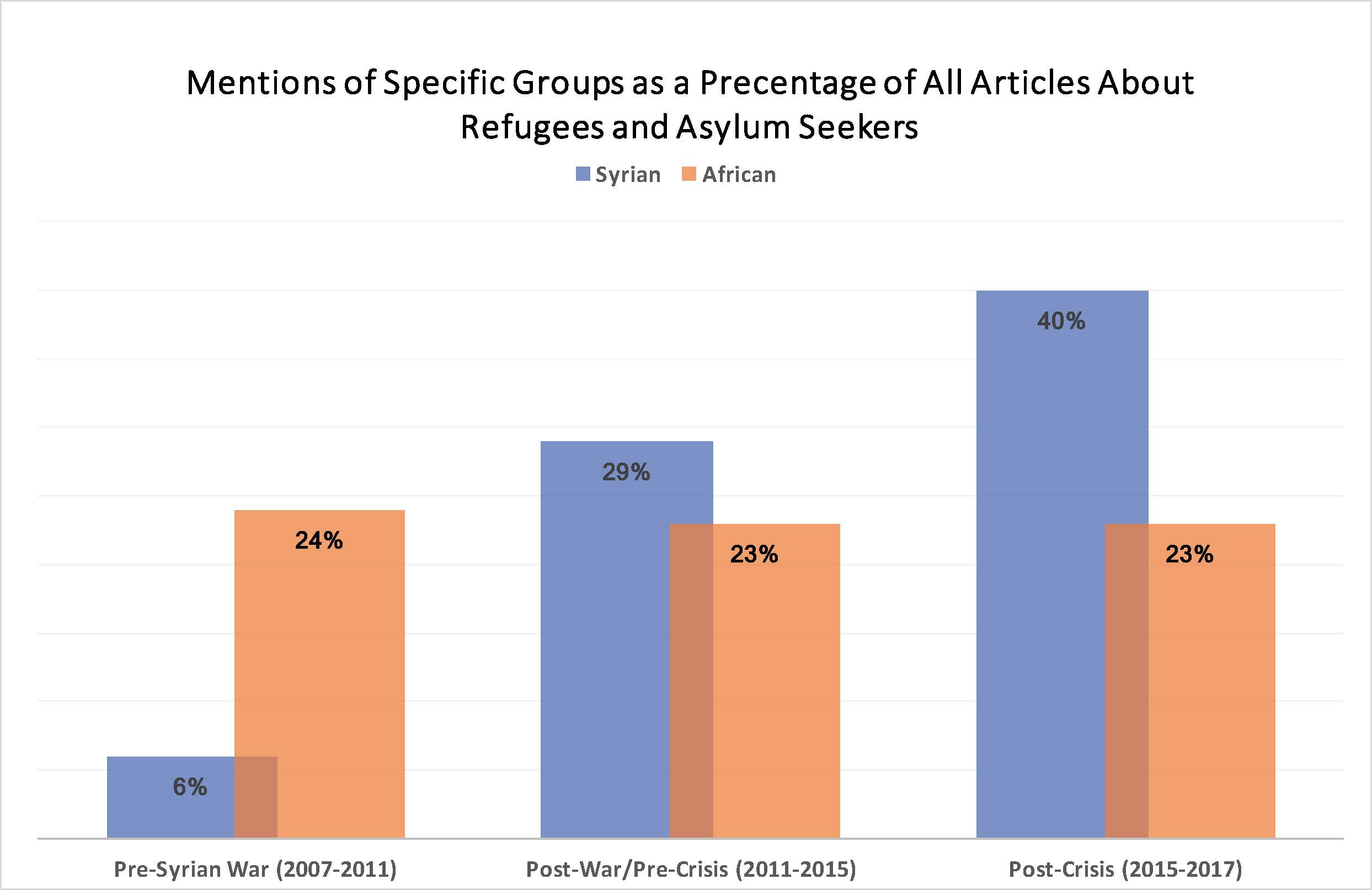 In November of 2016, two months after the UN declared a Global Refugee Crisis, the Washington Post published an opinion piece by Mehdi Hasan entitled, “Obsessing over Europe’s refugee crisis while ignoring Africa’s is white privilege at work.”

Hasan argues that the Western media gives far more publicity to the Syrian refugee crisis and its impact on European countries than to African crises and their impacts on other African nations. He attributes this disparity in coverage to the rich, whiteness of Europe versus the poor, blackness of Africa. Hasan points out that despite being the “largest refugee camp in the world” in 2016, Kenya’s Dadaab was discussed and photographed far less frequently by the media than the much smaller “Jungle” camp in Calais, France.

Hasan’s article raises a question that we explored in our 2018 study, “US and UK Media Portrayal of Refugees and Asylum Seekers.” While there is a proliferation of research on the Western media’s coverage of refugees, few scholars have examined how the specific nationality and/or race of refugees impacts their representation. One study that has examined these issues, a 2016 study by Holmes and Castañeda, finds that Syrian refugees fleeing to Europe receive more media coverage then African refugees, and that they have “displaced” Africans over time.

We examined these findings by exploring the extent to which coverage of Syrian refugees increased after the outbreak of the civil war in 2011 compared to trends in coverage of African refugees. We analyzed 51,155 articles referencing refugees or asylum seekers drawn from six prominent US and UK newspapers (The New York Times, The Washington Post, USA Today, The Guardian, The Daily Mail and The Daily Telegraph), between 2007 and 2017. Using computer-assisted analysis, we tagged each article that mentioned the ten countries facing the largest refugee crises: Syria, Afghanistan, Somalia, Sudan, South Sudan, Democratic Republic of Congo, Myanmar, Central African Republic, Iraq, and Eritrea. We then analyzed trends in these articles over time - and what we found surprised us.

Contrary to Holmes and Castañada’s claim that media coverage of Syrian refugees has displaced that of African refugees, the proportion of newspaper attention devoted to African countries has remained steady between 2007 and 2017. While the percentage of articles discussing Syrian refugees has increased dramatically over time—from 6% before the outbreak of the civil war, to 29% after the outbreak but before the crisis, to 40% after the crisis—nearly a quarter of all articles across this entire time period have discussed African refugees. Unsurprisingly, as the refugee crisis has worsened worldwide, Western newspapers have substantially increased their coverage of refugees overall.

While growing coverage of Syrian refugees does not appear to be associated with shrinking coverage of African refugees, we did find that Syrians receive disproportionate media attention based on their raw numbers. In 2017, Syrians constituted roughly 30% of the global refugee population (5.5 of 17.1 million refugees), yet they are discussed in 55% of articles mentioning refugees that also reference a specific refugee nationality in that same year.

What to make of all this? First, it’s important to note that this finding does not say anything about how the Western media portrays these two refugee groups (for example, whether newspapers use more positive or negative words when discussing Africans and Syrians; our initial research suggests they do not). What we can tentatively conclude is that the disparity between the media’s coverage of Syrian and African refugees is not as severe or simple as Hasan’s article claims.

Methodological note: We analyzed 51,155 articles drawn from a cross-section of 6 daily and Sunday newspapers in the United States and Great Britain. Our analysis includes every article published in those papers between January 1, 2007 and December 31, 2017 with the root words “refugee” or “asylum seek” in the headline or text of the article. For additional information about our methods, click here.